The Restaurant of order mistakes:

Heart touching Story behind this Restaurant:
Could you think if you go to restaurant  and order some food what you looking for and servers made mistake and give you wrong order. Basically, this restaurant is about staff who working there and having problems related to disease called Dementia and good think about this restaurant is customer blessing to make mistakes.Moreover, Servers are greeted with smiles and laughter.
"The Restaurant of order mistakes" is owned by Shiro Oguni, he is a japanese TV director, whose motive is to create awareness of Dementia and make some positive attitude toward this problem.

The restaurant provided its service first in June and had a second run on september 16 for about three days.This restaurant is leading  restaurant in japan because of rapidly growing population and also developing number of dementia sufferers.

Oguni said the thought behind the eatery is for individuals to take in more about the condition and think about it. As far as concerns him, he knew minimal about dementia until the point when he began exploring it for work.

"More than the picture that dementia is startling, troubling and hazardous, the words I regularly get notification from coffee shops are sure - 'charming,' 'interesting,' 'upbeat to be with,' and 'agreeable,'" Oguni, 38, said in a current meeting.

He said that while "dementia is a to a great degree grave issue," he thinks that it's consoling to hear such positive remarks.

Dementia alludes to a general classification of manifestations influencing the mind, including memory misfortune and weakened judgment caused by harm to nerve cells. While abating the advance of the condition is conceivable, there is no known cure or built up treatment to address the underlying drivers. The most widely recognized kind of dementia is Alzheimer's ailment. 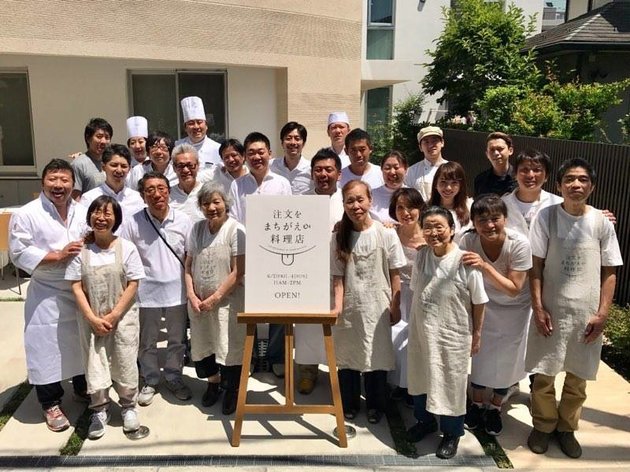 How this Restaurant is related with hospitality marketing.

As the nation thought to have the biggest maturing populace, the Japanese government and private area are venturing up endeavors to manage the taking off expenses of giving medicinal and nursing consideration to individuals with dementia.

They are likewise expanding measures to anticipate auto collisions including elderly drivers with dementia and attempting to monitor individuals with the suffering who disappear.

Government measurements demonstrate that the quantity of individuals more than 65 with dementia is required to bounce from approximately 4.62 million of every 2012 to 7 million by 2025.

Yoko Kono, 78, and Hideko Maruyama, 82 were among the 17 male and female servers and servers on pivot on Sept. 16.

"It was fun," Maruyama said amid a break at the eatery, which opened at 11 a.m. By the evening, she appeared to have overlooked the waitressing she had done that morning, however she was enthusiastic and willing once called upon to serve once more.

Resounding her "colleague," Kono was all grins when gotten some information about her undertakings. The two ladies said they would need to go to the eatery as clients.

The match, who volunteered to serve at the eatery, are from an office keep running by Daiki Angel Help Co., which gives nursing consideration to the elderly.

"I am simply cheerful on the off chance that they feel the experience is by one means or another fulfilling," Oguni stated, including he trusts the eatery can be opened every year, maybe matching with World Alzheimer's Day on Sept. 21.

The three-day keep running in September was influenced conceivable because of the around 12.9 million to yen (about $115,000) that was gathered through crowdfunding.

Very nearly 300 individuals came, for the most part the individuals who helped in the crowdfunding effort, and the eatery was sold out each day.

The eatery, whose name is a play on the title of a Japanese book, "A Restaurant of Many Orders," was enlivened by Oguni's involvement of being served a dumpling rather than a ground sirloin sandwich one day at a nursing care office.

Relating the story, he said he was in regards to call attention to the blunder yet halted himself and thought, "This is the world individuals with dementia live in. It's no major ordeal. It's OK to commit errors."

The undertaking has pulled in consideration in Japan as well as in nations including South Korea and Australia. Lowered by the premium, Oguni said the coordinators are anxious to share what they've figured out how to duplicate the activity somewhere else.

He focused on that sorting out an eatery of this nature is "not that straightforward," requiring the assistance of experts from the eatery, inside outline and social welfare areas, among others.

It was likewise essential to him that the eatery satisfied its capacity and did not compromise on the nourishment and different points of interest.

Hideyuki Fujimi voyaged the distance from Osaka City in western Japan for a feast and was happy with both the nourishment and the administration.

"I could feel the neighborliness of the staff and the care they took," Fujimi, 35, said. His 35-year-old companion, Naoya Muto, who originated from Saitama City, close Tokyo, portrayed the environment as "happy," and trusts the eatery venture proceeds.

The fact of the matter isn't that servers overlook orders, yet the results at times draw unforeseen chuckling, as when a server escorted a coffee shop to a table before sitting down herself. Or on the other hand when a server requested that a coffee shop take the request of his table mates.

Other than that, there were no real goofs, evidence constructive, Oguni stated, that even individuals with dementia can perform assignments under the correct conditions.

Yasuko Mikawa, 62, determined to have early beginning Alzheimer's, played piano. She engaged burger joints with her execution of Johann Sebastian Bach's "Ave Maria," nearby her better half playing the cello. She likewise played when the eatery initially opened in June.

Kazuo Mikawa, 69, said he was thankful for the open door given to his significant other, who had quit playing piano subsequent to being determined to have her condition. "It has reestablished her certainty," he said.

Yukio Wada of Daiki Angel Help and leader of the venture's official board, said he was awed to perceive the amount Mikawa's execution had enhanced over the three months.

He trusts the eatery venture isn't just about individuals with dementia, however a chance to consider how benevolence can flourish in the public eye.

"It's extremely not tied in with making a town that is well disposed to individuals with dementia alone. Or maybe, it's about how we can make a general public where everybody is caring to each other," Wada said.


Toward the day's end, the servers may not recall. Be that as it may, the fun communications and being treated with generosity won't be lost on them and the coffee shops.

What are some Hospitality Trends:

It is because the restaurant features "order mistake". the restaurant should pay attention to the price setting. the price of food is best in a similar degree. if guests planning to order a cheap meal, but they got an expensive meal. their bills would be different. some people think they take benefit, but some people loose and feel unfair.

The restaurant of order mistakes in Tokyo was a pop-up restaurant that ran from June 2nd to 4th, and it specifically hired staff with dementia to show that people can still be functioning members of society even with a degenerative brain disease. therefore, the feature is trend of its own and is taken as a joyful and peaceful.

The three-day keep running in September was influenced conceivable on account of the approximately 12.9 million to yen (about $115,000) that was gathered through crowdfunding.Just about 300 individuals came, essentially the individuals who helped in the crowdfunding effort, and the eatery was sold out each day.

"The order mistake restaurants" can create accounts on social sites. Instagram, Facebook, etc. This allows more people to notice the restaurants. Not just local, but also international. People will pursue novelty to come here. That makes the restaurant more famous.

2. The server being old age are less effective and efficient because of their age and cognition so they struggle serving plus they also suffer from dementia which acts as a obstacle between their decision making.

3. Memory loss is one of the feature of restaurant and issue for some people as if a person orders something and gets something else can bring stress.

4. Fainting while serving is common while serving in the servers. As they are old and weak  they might fall while serving others.this can cause a problem to their guests as  they view everything around them and can feel bad for the people falling.

5. lack in youth understanding according to their tastes and liking.